From the Buying Director’s table 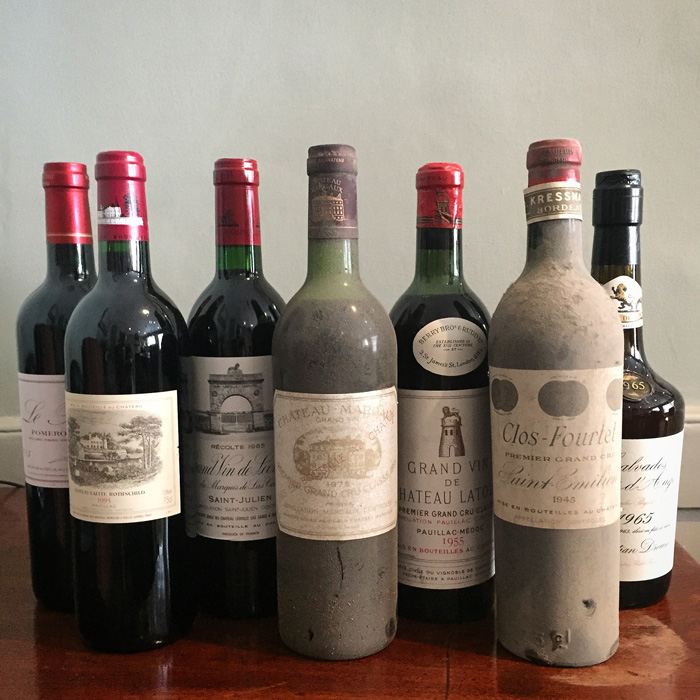 This was the first in an occasional series of The Buying Director’s Table: events to provide the opportunity to taste, enjoy and meditate on great and rare wines in quiet and discreet surroundings in the company of the Berry Bros. & Rudd Buying Director. Even in a career blessed with many vinous privileges, this dinner was highlight for me. The theme was a wine from every year ending in five, back to 1945, with the honorary exception being a Calvados from 1965, for obvious meteorological reasons. The evening did not disappoint.

The preparation started for me at 4pm, with the delicate task of removing ancient and crumbling corks from the oldest wines, and to check their condition. No corks emerged intact but the small nip taken from each proved that all the wines were still in good health. Resealed with more modern corks, these wines then waited for the evening.

My four guests arrived for 7pm, to be greeted with the exceptional R & L Legras Blanc de Blancs Cuvée Présidence 2005. Ten years on, it was still fresh and bright, with an old-vine vinosity, but a stripling in the context of what was to follow.

Now seated in the cosiness of the Delft Room, we began with Huet’s 1945 Vouvray Haut Lieu. The stock was acquired by Berry Bros & Rudd by personal agreement with Noël Pinguet in 2013, from his personal reserves after the sale of the famous estate. The wine actually pre-dates Noël’s father-in-law Gaston and was made by the domaine’s founder, and Gaston’s father, Victor, himself a prisoner of war. To begin with such a significant vintage so close to VE Day was humbling. The wine itself was astonishing. Originally a demi-sec but drier now, as older sweet wines usually become, the sugar had evolved into a honeycomb carapace, with the palate filled with a dry, cool stone focus. Becoming more expressive as the air embraced it, it was a superb match for the caramelised veal sweetbread, whose sweetness reinvigorated the wine to perfection.

With the Vouvray now in the rearview mirror, we embarked on our decimatory time-travel. To partner the roast squab pigeon, we paired 2005 Le Pin and 1995 Ch. Lafite. The Le Pin was glossy, succulent, modern and confident, a hint of ironstone behind the plush, arguably unevolved, but with great promise. The Lafite was expressive, a fine nose with some spice and a hint of savoury, just compromised a little by the pinch of tannin on the finish that marks the Left Bank in this so-nearly great vintage.

To the main course of rack of lamb, Jersey royals, peas and truffle; simple but intense. A majestic 1985 Ch. Léoville-Las Cases was sumptuous and at the peak of its game, a seamless, charismatic strutting peacock. Suffering by comparison was the 1975 Ch. Margaux, from the Berry and Rudd family reserves. Although tasted at 4pm, I did not decant the wine until at the table and service was required, to preserve as much of the wine’s delicate perfume as possible. The wine, like its cork, did indeed prove friable, a dusty aroma of black tea and a vaulted but echoing architecture. This was the last vintage made before the sale of the château to the Mentzelopoulos family and the start of its great renaissance. After the crash of 1973 and under the remnants of the ownership of the Ginestet family, one had the impression of attenuation but also faded aristocracy.

Once more to the decanting cradle for the 1955 Ch. Latour and 1945 Clos Fourtet; both again from the family reserves. Gently poured into smaller glasses to compact the wine and its aromas, these were revelations. The Latour was only mid-shoulder level in the bottle and did show an element of prune when first poured, but its majestic rise through the next 45 minutes was astonishing, growing in intensity and purity, even against a vigorous cheeseboard. By common consent, this was the wine of the evening although, in its own away, the Vouvray was also exceptional. The Clos Fourtet was, by coincidence, owned in 1945 by Fernand Ginestet, who sold it in 1947 to allow the purchase of Ch. Margaux in 1949, thus connecting it to our Margaux 1975. As to be expected, the Clos Fourtet did not match the Latour for complexity, but it was still delightfully rounded and jovial, the sweet St Emilion fruit still open and fresh. And then finally, to complete the canon, to 1965 for Christian Drouin’s Calvados Coeur de Lion. No such fortitude was necessary; the warmth of the trou normand caressed our repletion and even permitted the occasional return to the last remaining drops of earlier delights.

What made the evening so exceptional was the fact that this was not just a litany of high-scoring trophy wines. Not all were great, although some assuredly were, but it was the contrast, the shading and nuances and the reflection of both history and nature that gave the evening its personality. Even the 1975 Margaux was fascinating; a creation of both its time and circumstance, a memory and marker of times past. That is what wine can do.

Booking for our Autumn / Winter Calendar of Events, including The Buying Director’s Table series, will open on 8th July on bbr.com. Please email Rebecca Lamont, Head of Wine School, to register your interest.