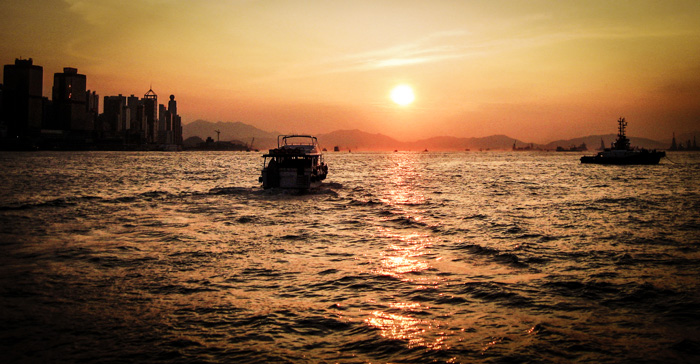 Jasper Morris MW – our Burgundy Director and tea fanatic – introduces a trio of Burgundian winemakers to three of the finest Pu’erh teas in Hong Kong.

After an exhausting week in Hong Kong, I took Olivier and Corinne Merlin and David Croix to my favourite tea shop, Sun Sing Tea, on the 32nd floor in Russell Street, by Times Square. Here I buy quite a few different teas including some excellent oolongs and best champion Ti Kuan Yin, but their real speciality is Pu’erh tea. You can buy teacakes back to the 1900 ‘vintage’. I dread to think what the old ones cost but a really good example from a recent year will set you back 800 to 1100 HK$, which is around £75 to £100.

We tasted three examples, one each from 2014, 2005 and 1996 to try out the three ages of tea, but there were important differences too. As for wine, the when, where and who are critical too. While there is some concept of seasonal differences, the age of the tea has a greater effect than the weather patterns of a given year. Which village or even tea plantation the tea comes from is of great importance, as indeed is who made it and by what methods.

The 2014 tea equated to a village appellation, coming from Mahei village in the Yiwu district. The tea cake was made by the artisanal method, being compressed in stone moulds. It was light in colour, fine and with a gentle bouquet – a little astringent on the second infusion, sweeter on the fourth, floral fifth time round, and so on.

The 2005 tea equated to a regional appellation, coming from the Yiwu district, with the cake again being made using stoneware. The extra decade of age made quite a difference, not just in the colour but also the depth of flavour. The third and fourth infusions here provided the highlights here, though the feeling remains that given 10 years the 2014 ‘village’ tea will go further in terms of subtlety and overall excitement.

The 1996 tea was machine engineered before production was freed from government control that same year. It was much the darkest in colour but arguably the shallowest in taste.

Three somewhat jaded Burgundians had rather perked up by this stage, enough to invest in a young teacake apiece. David Croix in particular seemed to be enjoying the Pu’erh flavours though I sensed Olivier Merlin remains loyal to his favourite Taiwanese oolongs – cause perhaps for a trip to Taipei.