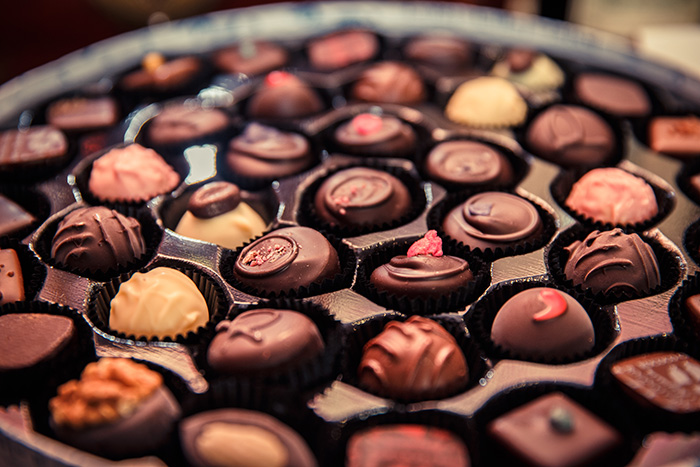 As both Valentine’s Day and Easter approach, Peter Newton – chocolate afficionado and member of our Fine Wine team – considers the parallels between fine chocolate and fine wine.

With Valentine’s Day and Easter fast-approaching, acquiring an appropriate box of chocolates is top of the shopping list; but, as a new trend sweeps the chocolate market, the old go-to brands simply don’t cut the mustard anymore (note the decline of the humble Creme Egg). Single-estate bars and the ‘bean to bar’ movement have brought chocolate out of the world of mass-produced confectionary and into the arms of the fine-food fraternity. When you look closely, it is no surprise that fine chocolate is so successful, bearing in mind its remarkable similarities to the intricacies and allure of fine wine.

Chocolate – like wine – is made from fruit, the cocoa bean, but just as with grapes there are many different clones and varieties that show very different characteristics. Instead of Chardonnay, Cabernet Sauvignon or Pinot Noir, chocolate aficionados might discuss the merits of Amelonado, Arriba Nacional or Porcelana, each of which have their own distinct flavour profiles. Terroir too is of great importance, using beans grown in the tropical rain forests of north-west Madagascar is very different to using those made on the Caribbean coast of Venezuela or the island of São Tomé off the west coast of Africa.

Both raw products require fermentation, for grapes the primary fermentation usually lasts between five and 14 days, although for the cocoa bean it is more like two to seven days. The equivalent of grape maceration is a procedure known as ‘conching’ where the cocoa is ground into microscopic particles over a period of up to 78 hours. It promotes flavour development through the release of volatile acids and oxidation and helps create a more mellow, rounded final product. The last stage in the process, as with wine, is a period of ageing so that the flavours can properly settle and the chocolate can be enjoyed at its peak.

Unsurprisingly it is not as straightforward as it sounds, and the best chocolatiers are equally as talented and creative as the most lauded vignerons. On a par with the established excellence of someone like Michel Chapoutier in the Rhône Valley, one might consider Michel Cluizel who has been crafting fine chocolate in Normandy since 1948; and as a chocolate equivalent to the eccentric yet trail-blazing Randall Grahm of Bonny Doon in California, take a look at Willie Harcourt-Cooze who makes chocolates in Devon with beans harvested from his own plantation in Venezuela.

It is, however, when tasting that the similarities between chocolate and wine shine brightest. There are in fact more flavour compounds in chocolate than there are in red wine and descriptors such as citrus, berry, earth, wood, spice and even red wine are common. There is also acidity, structure, body and length. It is not unusual to find tasting notes that could just as easily be applied to a fine Claret or Burgundy as to a single-origin chocolate.

The image of chocolate is changing and many wine experts are at the forefront of this change. Master of Wine Sarah Jane Evans is a recognised chocolate expert, having published her book ‘Chocolate Unwrapped’ in 2010, and is a founding member of the Academy of Chocolate, which was set up in 2005 to help promote the industry and educate enthusiasts. The Academy’s seventh annual chocolate awards takes place on Sunday 15th February and the Chair of the Jury is TV wine personality and co-chairman of the International Wine Challenge competition, Charles Metcalfe.

Fine chocolate like fine wine can be a cerebral, as well as sensual, pleasure and there are more similarities between the two than one might first imagine.

Find out more about how to find the perfect bottle to match your chocolates of choice.