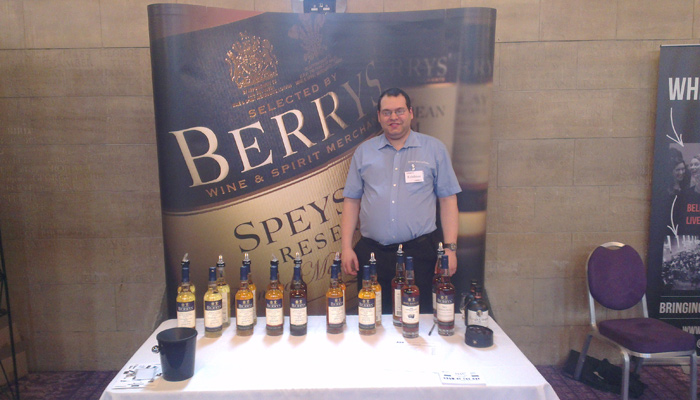 March is probably the month I most look forward to each year.  After the hustle and bustle of December in my main job in our Bin End Shop in Basingstoke, and the necessary eight or so weeks rest afterwards, it traditionally heralds the start of the Whisky Festival Season.

As well as working at out Bin End Shop in Basingstoke, for the last four years I have also travelled around the country pouring and promoting Berrys’ Own Spirits on many Saturdays throughout the year.

The majority of these are festivals run by a company called The Whisky Lounge, who also happen to be the sister company to the UK wholesale distributors of the Berrys’ Own Spirits  range the Great Whisky Company.  The Whisky Lounge events are intended to be a relaxed and accessible way to enjoy whisky, with very reasonable entry prices (which unlike some festivals give you unlimited access to all the whiskies on the various exhibitors’ tables), a glass to taste with and then take home, some tokens to try special “under the counter” drams and even access to some free masterclasses.

For the last few years, the season has begun in the delightful venue of the Civic Centre In Newcastle and this year was no different.

For the exhibitors it’s an excellent chance to catch up with each other after the Christmas break (the last festival of 2012 was back in October), try some new releases that have come out in the previous few months and also to see some familiar faces amongst the consumers from previous years, whilst at the same time introducing new people to our range and company in general.

On our stand this year are 10 of our Berry’s Own Selection Whiskies, plus our XO Armagnac and the ever popular The King’s Ginger.  Due to the nature of being an Independent Bottler, most of which are single cask, we have arguably the greatest range of the exhibitors.  Not only in terms of numbers of products we show, but also in terms of style – from the rarer Single Grain whisky (we actually have two of these this year) through lighter Lowland to peaty Islay, with a heavily sherried Speyside thrown in for good measure.  The age of our whiskies is another thing which greatly varies from a 9 year old to a stunning 37 year old.

As we like to keep the same lineup for the whole year where possible, this means there are often whiskies on our stand which have sold out through the usual Berry Bros. & Rudd channels and are only available to taste and buy at the festivals.

Such an example at Newcastle was our recently bottled Braes of Glenlivet, which has proved such a hit due to its approachable nose of Rhubarb and custard and fruity nature, that there are only a handful of bottles left in each of our shops.

The Whisky Lounge festivals, in particular, are a superb way to be introduced to whisky festivals, and if you do decide to attend one, please do stop by at our stand for a chat and a dram (or two!).

This year the list of towns and cities we’ll be visiting is bigger than ever before from Aberdeen in the north to Brighton in the south and Bristol in the west, to name but three.

To find out when we’ll be in your area, visit the Whisky Louge’s website here.

If you can’t make any of the Whisky Festivals, don’t worry, we have biannual Whisky Days in the Bin End Shop in Basingstoke too.  The next one  will be on Saturday 20th April, when I’ll be pitting Berrys’ Own bottlings against their official distillery bottled counterparts and Alex Ross will be showcasing a selection of whiskies from distilleries that are sadly no longer with us. Full details here.