The following morning, Jason and I headed to Ch. Léoville-Las Cases where he was taken round the vineyard by the vineyard manager while I tasted the range of 2012s from all their estates (Nenin in Pomerol, Potensac, Clos du Marquis and Las Cases in St Julien). Geordie joined us and we then headed to Ch. Ducru-Beaucaillou. I have spent quite a bit of time in wineries in my career and, after a while, I have to admit that they all look the same – but I am always in admiration of the people behind the wines. Despite modern technology, vineyard workers whose families have been working in the same place for generations use the same old skills, such as racking with a candle and fining with egg whites. 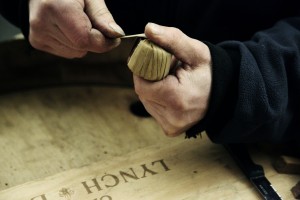 There was an older man there half my size who was lifting empty barrels above his head and stacking them up, whilst another younger chap, who was the second generation, was racking and making a seal made of Jonc (rush) for the ‘bonde’. This is the kind of stuff I really like and admire and we rarely take time to watch. After a lot of watching, Bruno Borie (who is one of the Bordeaux grands hommes, and someone for whom I have a lot of respect) took us into his kitchen for a bite to eat. Bruno loves food and cooking; his kitchen is not any ordinary kitchen, it has all the toys you could ever wish for. We sat down at the table and had some lovely white asparagus (I still do not know why we eat green asparagus in the UK) with sauce hollandaise, followed by a simple but most delicious omelette with spring garlic, finished off with a just-released 24-month matured Comté. 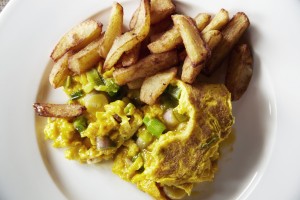 All this with some 2001 Riesling, Cuvée Frédéric Emile by Trimbach (I love this wine) and a bottle of both the 2004 and the delicious 2000 Ch. Ducru-Beaucaillou. We could have stayed there all day but we had our last encounter of the trip with Jean-Charles Cazes at Ch. Lynch Bages to taste his 2011s (2012 is not to be showed until the official date) and a quick tour of the winery. We spent a bit of time in the smaller white wine cellar looking at the different bâtonnage techniques. Blanc de Lynch Bages, like the majority of white Bordeaux, is not talked about much but over the last few years has turned from a quite oaky and heavy style to a great, fresh, yet still very Bordeaux style of wine which I very much enjoy. We said our goodbyes to Lynch Bages and headed for the airport.

Although, I have yet to go round the 57 chateaux that we will visit during the week of the 8th of April, I have now been to Bordeaux twice during the harvest and have tasted a few of the 2012s in their infancy, and my opinion is starting to emerge of the vintage. For what I have seen and tasted so far, I think we might have a better vintage in 2012 than 2011: a better but very different vintage. 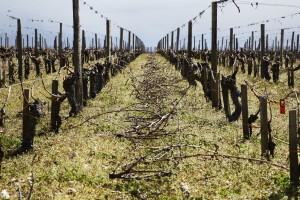 When I was there during the harvest, all the vines and bunches looked very healthy and, despite a few problems at flowering and véraison in the summer, the very hot end of August readjusted the imbalance and the vintage looked like it would be saved. Until, that is, just after I left in October, when the heavens opened and never closed. For those who had harvested their Merlot (the majority) all was good but the Cabernets needed a few more days/weeks to ripen to their full potential and, unfortunately, with the dormant rot ready to deploy, they then had to be rushed to the winery. For those with technology this should not be too much of a problem but for others, in the Médoc in particular, the lack of ripeness may come through in the wines. The Merlot-dominant wines will have done well. The same will apply for the domaines which have the best terroirs and where the Cabernets are well-exposed and on higher ground. The work in the winery will no doubt contribute more to success this year than many others, and we will have to be aware of the ‘make-up’ applied to some of the wines.

From Monday, 8th April, we will be reporting fully on the 2012 Bordeaux’s, from vineyard to vineyard. So, for in-depth coverage and understanding of this complicated vintage, follow us on Twitter or look out for our daily blog posts.