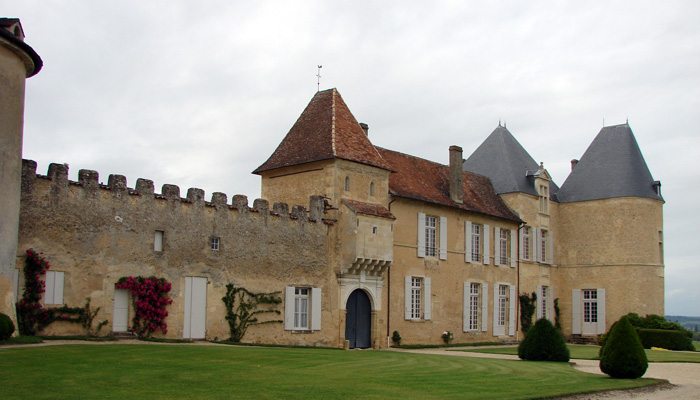 Ch. d’Yquem announced last week that they will not be releasing their 2011 en primeur at this time, heralding the end of a difficult en primeur campaign.

Bordeaux en primeur is one of the most exciting dates in our calendar, and we do a substantial amount of our business during this period. All holidays are cancelled and the buzz in the office is almost tangible. The en primeur system is an ancient tradition originating in the early 16th century by the British to import port; it was adopted by the Bordeaux trade in the middle of the 16th century. By selling their wines after the harvest, before bottling and release, the producers were able to counter cash flow problems covering their operating expenses while the wine was lying in barrel. The advantage for the consumer has been a guaranteed supply of their favourite wine in the format required (large formats in particular can be difficult to get hold of later), an assurance of provenance as it is bought directly from the producer and most importantly the en primeur release price is usually cheaper than its future price. This lower cost is justified, considering the fact that the consumer or merchants in essence extends a 2-3 year loan to the producer.

Each vintage in Bordeaux captures a moment in time, reflecting both the weather pattern and the qualities and emotions of the producers at this unique moment in time. The marginal climate in Bordeaux means that no two vintages are the same, giving an extra dimension to the wines but also putting an extra edge to understanding pricing policies in different vintages. Top vintages such as 1961, 1982, 1996, 2005, 2009 and 2010 will always be sought after, but also come at a great cost and require many decades of cellaring. Hence the reason that vintages such as 1998, 2001, 2006 and 2011 have their firm followers seeking wines that will provide drinking pleasure without the cost or patience required for the outstanding vintages.

An en primeur campaign really starts in early spring when we taste the wines. Berrys believes strongly in giving personal advice to customers and sends both the buyers and the entire fine wine sales team to Bordeaux over a period of three weeks to taste through the wines. Looking at acidity, flavour concentration, tannin levels and structure we taste our way through hundreds of samples. The 2011 clearly don’t have the concentration and the longevity of the top vintages, but I liked the wines. They are similar in style to 2001 but with more freshness, which I find very attractive. Whereas the 2009s and 2010s may need 10-30 years to start drinking, the 2011s will open up beautifully long before. In fact in many instances I prefer this vintage to 2008, though it is unlikely to receive the high ratings of that vintage. During the week that I was there, the main topic of conversation apart from the wines themselves was pricing. The producers realised that prices had to be substantially down on last year, but exactly where to pitch was clearly a burning question for them.

Yquem quoted the ‘delicate context’ of 2011 en primeur as their reason not to release at this point and the frustration has been felt throughout the last few weeks. A usual en primeur starts with the release of the minor chateaux, followed by the classed growth almost in order of importance, culminating with the biggest names. Usually there are always a few exceptions to this general rule, but in 2011 there was no rhyme or reason to the releases. Lafite broke the usual tradition with a surprising early release priced only just below similar back vintages. It was not the obvious ‘buy’ that we had hoped. Neither was Cos d’Estournel; a difficult wine this year, its pricing was set far too high compared to back vintages. Silence followed from Bordeaux apart from a serious of delicious sweet wines (2011 is an excellent vintage for whites). It took until the second week of May for the pace to pick up, and a frenzy started on Tuesday 15th May, quickly dubbed ‘black Tuesday’ by the wine trade. With 43 releases it was impossible to do justice to the wines that deserved to be highlighted and consumers were rightly frustrated and confused by the number of notifications.

The chateaux continued their stream of releases, with welcome breaks during French holidays (forgetting the English holidays – the traditional hub of the fine wine world) and mixed pricing in an economically difficult climate. Those that were priced well such as Pontet Canet, Ducru Beaucaillou, Calon Segur and L’Eglise Clinet have been well received, others less so. Lafite made another unexpected move by releasing Carruade during Vin Expo. With the whole of Bordeaux and many of the UK wine buyers in Hong Kong, the release of Carruades late in the evening caused further frustration to those confirming allocations. The frustration was clearly felt when some wine merchants published their summary of the vintage before the end of the campaign while awaiting key releases such as Parker’s wine of the vintage Ch. Ausone, icons such as Petrus, one of my favourite wines of the vintage Ch. Ducru Beaucaillou as well as Brane Cantenac, Talbot, Le Pin, Leoville Las Cases and Vieux Chateau Certan.

At Berrys I have the real privilege of tasting the wines and having the freedom to give honest advice to my clients. Over recent weeks our challenge has been to give honest advice about pricing and quality, to keep our customers updated with the releases when they happen, and yet to try to keep the email notifications to a minimum. I hope that we have succeeded in this and that was a major reason for trying to write this blog – to give you a glimpse of what happens in our department.

I think it is unlikely that we will see future release prices similar to those of 2001 or even 2008 as the fine wine market has changed and the number of consumers has increased dramatically. However, it has always been the golden rule that to buy wines en primeur, prices need to be attractive. Hopefully the buzz will return in 2012, as it would be sad to say goodbye to such a long standing tradition.