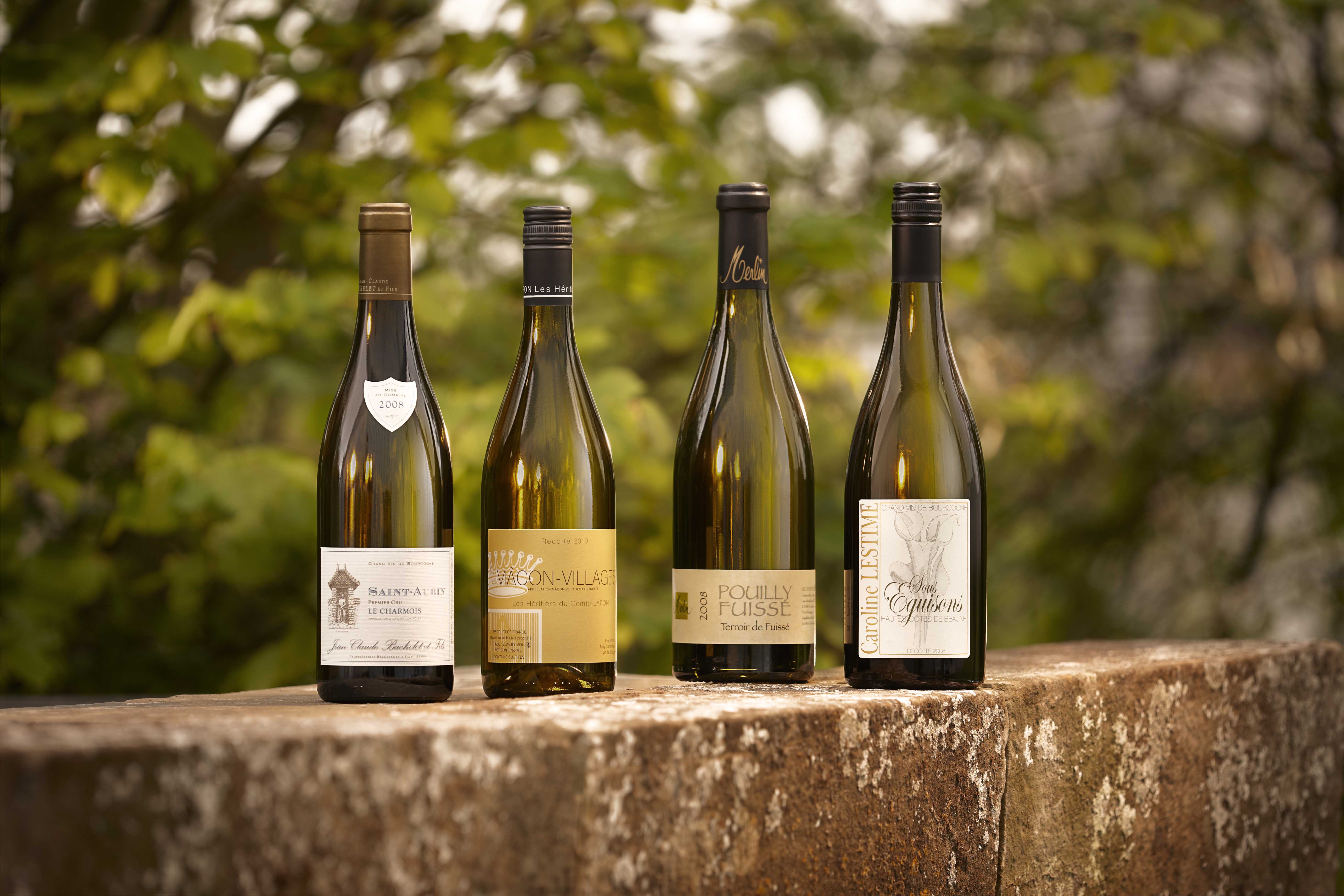 I have written a quick guide for each appellation below, I hope they prove useful when hunting for Burgundian gems!

The Mâconnais
It is one of Burgundy’s best-value white wine regions. Its wines used to be unremarkable and simple, rarely lasting more than a year or two after the vintage, but since the late 1990s most growers have been making oak aged, complex and reasonably concentrated wines which will develop well in bottle. The appellations that stand out:

Côte de Beaune Whites
The heartland for white burgundy is the Côte de Beaune with its three great villages, Meursault, Puligny-Montrachet and Chassagne-Montrachet. Here the vineyard classification system really comes into its own.

On the flattest land, the wines will be classed only as generic Bourgogne Blanc; as the slope begins to rise the wines are designated by the name of their village.At mid-slope the finest vineyards, whose wines will be bottled separately, are categorised as Premier Cru (e.g. Meursault Charmes) or Grand Cru (e.g. Le Montrachet).

White wines produced under the AOC Bourgogne make up the vast proportion of Burgundy’s output. These are best enjoyed within 3 or so years, and are very reasonably priced compared to their higher-end counterparts.

Meursault
Its wines are typically rich and savoury with nutty, honeyed hints and buttery, vanilla spice from the oak. Even though it is considerably larger than its southerly neighbours Chassagne and Puligny, Meursault contains no Grand Crus. Its three best Premier Crus, however – Les Perrières, Les Genevrières and Les Charmes – produce some of the region’s greatest whites: they are full, round, powerful and age very well. Perrières in particular can produce wines of Grand Cru quality, a fact that is often reflected in its price.

Many of the vineyards below Premier Cru, known as ‘village’ wines, are also well worth looking at. Many growers vinify their different vineyard holdings separately, which rarely happens in Puligny or Chassagne. Such wines can be labeled with the ‘lieu-dit’ vineyard alongside, although in smaller type to, the Meursault name.

Premier Cru Meursault should be drunk from 5 to 15 years of age, although top examples can last even longer. Village wines are normally at their best from 3 to 10 years.

Chassagne-Montrachet
When it comes to the world’s greatest white wines, the border between Chassagne and Puligny is the x that marks the spot, the treasure at the end of the rainbow. Within a few hundred metres lie five wonderful Grand Crus, 3 of which are in Chassagne. They are led by the luscious, perfumed, but variable, Le Montrachet, to which Chassagne gained permission in 1879, along with Puligny, to hyphenate its name.

Both Montrachet and the rich, nutty, honeyed Bâtard Montrachet are shared between Chassagne and Puligny. The fragrant, very fine and rare Criots-Bâtard-Montrachet however, lies entirely within Chassagne’s borders. The Grand Crus have their own appellations which is why Chassagne (or Puligny) does not appear on the label.

Chassagne’s style is often described as lying between that of Puligny-Montrachet and Meursault: less fine than Puligny, less rich than Meursault but containing elements of both. Chassagne is minerally yet succulent, often floral with hints of hazelnuts.

Despite a bevy of very good Premier Crus, it is not as good or famous, overall, as Meursault and Puligny, but it is usually extremely good value. Grand Crus should not be opened before 8 years of age and can last for 20 or more. Premier Crus are at their best from 5 to 15 years of age; village wines from 3 to 8.

Puligny-Montrachet
Sandwiched between the larger Chassagne and Meursault, Puligny produces wines that are more striking than any in the Côte d’Or, portraying a floral elegance alongside a stylish, steely concentration. They are very different to Meursault: more refined and delicate, and less rich.

Village level Puligny-Montrachet from top growers can be very good indeed. The reputation of Puligny-Montrachet is based around its four Grand Crus. Many considering Montrachet to be the greatest white wine in the world. At its best it has an intensity, complexity and elegance that make you wonder how such a wine could be made from mere grapes.

The luxurious and explosive Chevalier-Montrachet is not quite as deep although it is probably the next best. Only marginally less impressive, and rather more consistent than Montrachet is the richly textured Bâtard-Montrachet (also shared with Chassagne).  Bienvenues-Bâtard-Montrachet is equally good, with the focus on honeyed finesse and exquisite balance rather than richness.

A host of fabulous Premier Cru vineyards can reach Grand Cru quality. Brimming with flavour and intensity, Le Cailleret and Les Pucelles, which both lie across the road from Le Montrachet, are prime candidates, along with Les Demoiselles, Les Combettes and Folatières.

2 Responses to “A Brief Guide to White Burgundy Appellations”