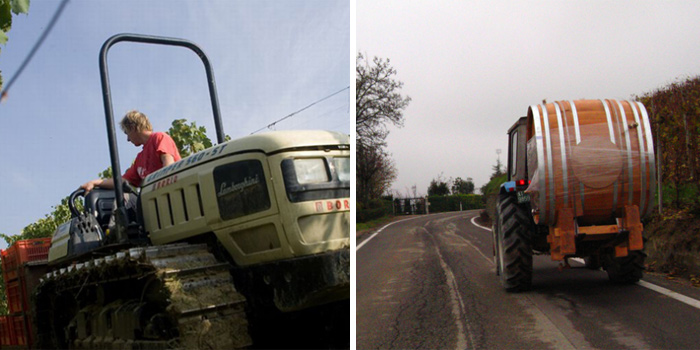 Joining Berrys’ impressive line-up of Barbaresco producers (Rivella, Cascina delle Rose, Luisin, Roagna, and Marinacci) at this year’s ‘Grand Tour’ Italian tasting at Lindley Hall, London on September 6th will be one Olek Bondonio, whose first vintage was in 2005. He is just one of the increasing number of exciting Barbaresco producers now emerging from this once much-maligned region.

The observant among you will have spotted that ‘Olek’ is no ordinary Piemontese name, while one look at him, blond and now fetchingly moustached, hints at his Polish blood. Tragically, much of that blood was spilled at the hands of the Germans as many of his grandmother’s family ended their days in a concentration camp. The ones that got away from the ghetto sought far-flung places such as the USA, while a notable few of Olek’s relatives were mentioned in despatches by Winston Churchill in writing for their valour in battle alongside the Allies.

The Piemontese connection was made during the 1960s when Olek’s (Polish) grandmother Brucha Norton came to Italy and met Olek’s grandfather, also a Pole. It was their daughter Nelka (“Nelly”) who married  the Piemontese Alberto Bondonio, whose family had owned a summer house in the Langhe since the 19th century: Cascina Berchialla. With the passing of Alberto’s father the vineyards were divided up between the children, with Olek’s father Alberto receiving a tiny plot that included vines in both Roncaglie and Roncagliette.

Olek left Alba’s wine school in the mid-‘90s and set off to make wine in New Zealand, Australia and Bordeaux, picking up an equally tasteful ‘bunch of grapes’ tattoo along the way, one that now features on his Langhe Nebbiolo label! Just as off-piste was his fame as a snowboard champion skier, honed during trips to the Alps from his Turin home.

2005 was his first vintage in charge at Cascina Berchialla, all two thousand bottles, since when he’s chosen to grub the mixed varieties lying in the Roncagliette vineyard and replant the prime spot with Nebbiolo. To make ends meet he’s buying Nebbiolo from Neive’s Starderi vineyard along with Dolcetto from the prized Alta Villa zone. He’s supported by his wife Alesandra, a fine chef in her own right at the Castello di Verduno, and their two, soon to be three, children Giulietta and Carolina.

Vinification is in a combination of cement, stainless-steel and large Gamba and Stockinger oak barrels. Production is currently limited to a couple of thousand bottles of the Barbaresco and only a thousand of the Roncagliette; a vineyard that Gaja chooses to declassify into ‘Langhe Rosso’ Sori Tildin and Costa Russi for reasons best known to himself. Meanwhile the true face of Barbaresco comes to the fore: Olek’s beautifully svelte 2009 examples will be on show in September at Berrys’ tasting. These are exciting times in Barbaresco.