Full Steam ahead: The Berrys and Rudds visit Anchor Brewers and Distillers in San Francisco 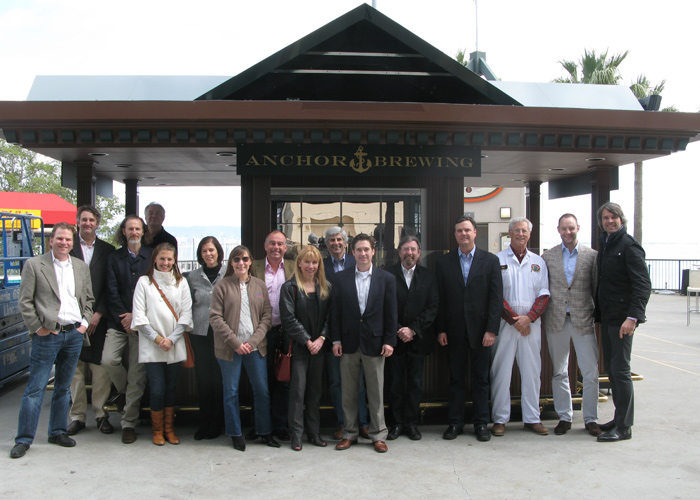 At the heart of Anchor Brewers lies ‘Anchor Steam’ craft beer, whose history dates back to 1896 (an anagram of 1698!) to the period of the Gold Rush. The craft beer brand was established as a national icon, distributed to 50 of the United States, during the ownership by Fritz Maytag from 1965 onwards. In fact it could be said that Fritz established the ‘craft beer’ (micro-brewery) category; one that is now exploding at the expense of the more mainstream beer brands. San Francisco being at the heart of this national thirst for artisanal products; a movement epitomised by Anchor Steam beer along with eight other Anchor beers, such the bitter hops flavoured ‘Liberty Ale’.

Fritz recognised the importance of high quality to support the brand’s value and loyal following; production was thus limited and prices remained high. In fact production started at 600 barrels/annum and has since risen to 100,000, 60% of which is sold in bottles, 40% in draft. He had imported copper fermenting tanks from Germany; continued to ferment the ‘Anchor Steam’ beer in flat beds, initially fashioned out of redwood now from stainless-steel (the ‘Steam’ rising as the beer cooled off); and only whole dried hops, imported from Washington State, the UK and from New Zealand are used (as opposed to pellets for the volume brands). And just as with Scottish single malt whiskies so the Anchor Brewery values the quality of the Sierra Nevada water used in the process. Overseeing all this is Mark Carpenter, who’s brewed alongside Fritz since 1971. In fact so important is delivering a quality beer to their customers that Anchor beers transport their produce to the East Coast via the railroad and not on boats rolling through the Panama Canal.

Anchor Brewers and Distillers therefore presents itself as a centre of excellence for artisan beers and spirits, based in San Francisco – one of America’s most historic cultural cities. It’s a very exciting (lateral) move for Berry Bros. & Rudd, particularly for the wealth of talent and resources that ABD brings with it.

One Response to “Full Steam ahead: The Berrys and Rudds visit Anchor Brewers and Distillers in San Francisco”