News from the Big Chill… 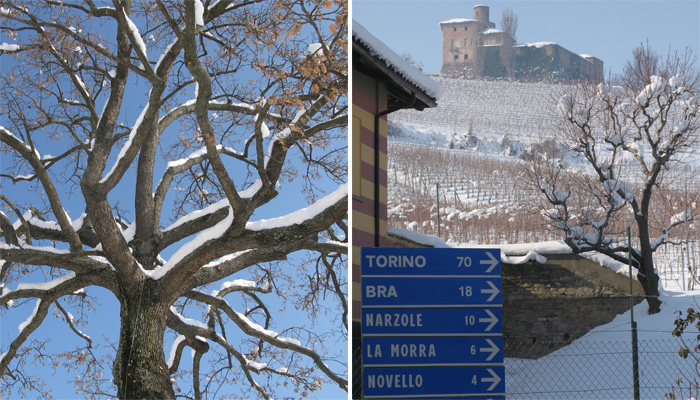 No, not from Wembley – ‘new manager please! (same result)’ – but more importantly here’s an update on new arrivals and what you can look forward to in 2012 from snowy Italia…

Fresh off the bench this spring (!) come a pair of sunny, but measured Sardinians as made by Adele and Maurizio at the tiny 6ha Altea Illotto estate just north of Cagliari: the 2010 Bianco an innovative blend of indigenous Nasco (think overripe lemons) and Vermentino (nerve); their 2010 Rosso meanwhile draws on the island’s two strengths: Cannonau and Carignano for a rich, arid red wine with purity and freshness.

Also crunchy pure is Manuel Marinacci’s 2010 Dolcetto d’Alba, from his single vineyard site in the village of San Rocco Seno d’Elvio, Barbaresco: a wine with such pretty violet aromas that it would put Dogliani’s finest in the shade.

Then there are the beautifully understated and incredibly drinkable Barbera d’Asti wines from Laiolo Reginin. Giampaolo and Anna tend this 7ha small but well placed property in the celebrated Barbera village of Vinchio. The 2010 ‘La Mora’ tastes so fresh as to have harvested yesterday, while their 2009 ‘Suris’ is kirsch rich while remaining supple and bright; a testament to the fine way they tend their vines.

Another new Barbera to make the first XI is Mario Fontana’s fabulously svelte 2009 Barbera d’Alba: a 100% Barbera that draws on fruit from the village of Sinio, source of his Langhe Nebbiolo, and from the noble vineyards of Castiglione Falletto, giving the wine real intricacy. Credit I believe must be given to one Davide Rosso, ace winemaker and friend (now consultant!) of Mario.

From further north-west comes a family of Valpolicella wines from Marcello Vaona at Novaia. His family’s 10 ha estate is located in the Classico zone of Marano di Valpolicella giving the wines a spine of minerally complexity: the 2010 Classico floral and crunchy, the 2007 Superiore, part suave passito, from a single site ‘I Cantoni’, while the 2007 Amarone displays chocolate cherry flesh and the 2006 Recioto sweetness as well cherry-stone savouriness.

The last two new entrants being the richly warm and enveloping 2009 Sangiovese ‘Martin del Nero’ courtesy of (the equally warm and enveloping!) Anna Lisa Tempestini at her minute Fattoria Resta; a hand-made wine from sensitively tended vines lying in the shadow of the great Montalcino hill. Also as pure and cared-for is the fruit that goes into young Olek and Alesandra Bondonio’s 2008 Langhe Nebbiolo and 2008 Barbaresco; both wines showing effortless fluidity and Piemontese style!

For now, preparations are already underway for the ‘Grand Tour’ Italian tasting and offer on September 6th at London’s Lindley Hall, an event that is being fine-tuned to bring you some of the brightest expressions of Italy’s great, and largely unrecognised fine wines.

And over the next few months I’ll be assessing further contenders from the little known regions of Alto Piemonte (Nebbiolo) and Calabria’s Cirò (Gaglioppo) along with wines from Basilicata and Puglia.

Game on! (or Avanti Savoia! as they say here)