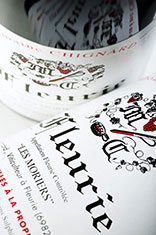 Personally, I think Beaujolais is brilliant. Yet it presents us with a paradox. Having achieved phenomenal worldwide brand recognition in the 70s and 80s with their light, fruity ‘Nouveau’ style, many Beaujolais producers are now trying to disassociate themselves from this style and hence from the very source of their success. Why? Well, human nature being what it is, as soon as the popularity of Nouveau became evident, certain producers jumped on the bandwagon with such gusto that they began to produce huge quantities to meet demand, and as is often the case, quality suffered severely. This is not to say that all Nouveau produced is of poor quality, or even that those producers whose quality did drop weren’t also producing other excellent styles of Beaujolais – but in the branding of any product, including wine, perception can be more important than reality. And most people’s perception of Nouveau (and by association, of Beaujolais in general) is still that of a thin, acidic, banana-and-bubblegum-scented wine which is barely more than alcoholic Ribena. The region’s image suffered so badly that by May 2003 Jancis Robinson MW had described Beaujolais as in ‘self-avowed crisis’ due to slowing demand, with ten million litres of surplus wine sent for distillation in that year alone.

Yet there’s still a chance that this Cinderella may get to go to the ball. With three excellent vintages (2009, 2010 and 2011) under its belt there has been a lot of positive press about the region, indicating a potential opportunity for significant growth in the UK. Not only that, but there’s a dynamic wave of new-generation growers and winemakers whose mantra is quality rather than quantity. They’re embracing organic and biodynamic viticulture and exploring different winemaking techniques. It’s an exciting time.

So how best can Beaujolais recapture the hearts of British wine-drinkers? There are many avenues of potential, which we just need to be reminded of. The low tannins of Beaujolais and Beaujolais Villages styles have always made them ideal alternatives to white wine, as they can be lightly chilled – so even in winter, don’t forget about this option. Then there are the ‘Cru’ wines. These ten villages in the north of the region have the right to call their wines simply by the name of each village and indeed most of their labels make no mention of Beaujolais at all, so a bit of insider’s knowledge goes a long way. This is the part of the region most closely modelled on Burgundy’s Côte d’Or, but thankfully rarely with the prices to match, so consider the Crus if you’re a Burgundy lover but don’t want to bust the budget every time you open a bottle. Terroir is key, with more and more single-vineyard bottlings showcasing the nuances between different sites. Oak is often used to age the wines, and with more structure than the other styles these wines can age, acquiring deliciously savoury Pinot Noir-like characteristics with maturity.

As in the Côte d’Or, the producer is absolutely key so make sure you choose carefully to be guaranteed a top-notch wine. Domaine Michel Chignard make one of my absolute favourites from Fleurie, elegant yet concentrated or for a more robust, earthy style consider a village like Morgon – Grange Cochard’s single-vineyard Côte de Py https://www.bbr.com/product-83564B-2010-morgon-cote-du-py-chateau-grange-cochard is an excellent example. If you can resist the vivacious, charming fruit of these 2010s (I certainly struggle!) then do your very best to lay some down for a few years as you will be amply rewarded. Whilst you wait, experiment with one of the lighter lesser-known Crus like Régnié from top grower Julien Sunier. Try Cru Beaujolais with white meat or even game dishes depending on the robustness of the individual style. Brilliant.

As you can see, I think there’s a lot of potential for this much-maligned and vastly under-rated wine. Will it be Belle of the Ball in 2012? Watch this space…