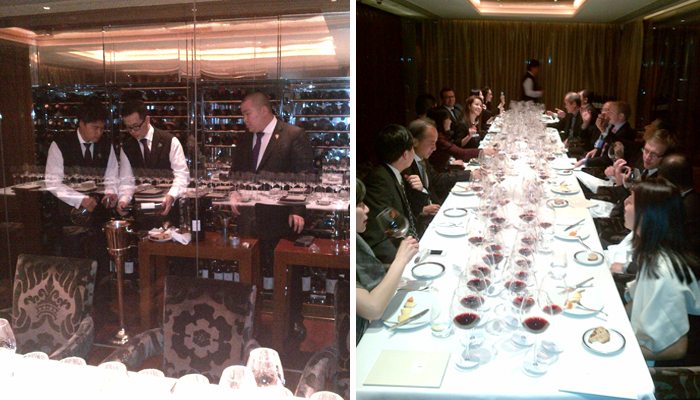 Wine dinners are more common than Dim Sum Restaurants in Hong Kong at present. To be honest one can get a little blasé about the frequency you get to drink great wine. However once in a while you experience a night that just stops you in your tracks and takes you that little bit closer to your maker! Well last week, unexpectedly, I managed to find myself sat at dinner – awaiting some of the finest food in Hong Kong (we were at 2 Michelin Starred Amber)… oh and also a vertical of the iconic First Growth going back to 66!

This grand Event did have a rocky evolution. Poor Big Si The Wine Guy was down to host but had to pass the baton onto me (tough life), and then 24 hours before Frederic Engerer (the genius behind Latour’s incredible run in the modern era) had to urgently fly back to Bordeaux as well. I had a feeling the event was cursed and all the bottles would end up corked! Fortunately we had the perfect replacements in Jean Garandeau (Ch. Latour’s Sales and Marketing Director) and Jeremy Quievre (Latour’s Asia Representative) – who were both at Amber hours before decanting and fine tuning the evening with more detail and tactical acumen than Sir Ale

Now in truth I have not tasted much Latour – certainly not mature Latour. Most of my experience has come at en primeur tastings where I have annually awarded Latour wine of the vintage – YET have not been able to really understand what these immature beasts will mature into. Well the stars were aligned and together with 16 Berrys’ customers, it was my night to find out! To kick things off – the pre-match warm up – was the 2003 and 2000 Forts de Latour. Pre-match warm up is VERY harsh as these are stunning wines in their own right and certainly at Second Growth level. What shone through here was the contrast in vintages. 2003 (16.5pts) all bells and whistles and little bit tarty – and I was not sure about the life expectancy. For me the 2000 (17pts) had the edge – cooler more structured and with a self assured certainty to it. Jean described the contrast perfectly, comparing 2003 to Marilyn Monroe and 2000 to Audrey Hepburn. I described the contrast as Katie Price to Angelina Jolie… I think that says a little more about me than the wines.

It was then time to fasten the seat belt and go through a flight of the Grand Vin. Starting at the 2001 and finishing at 1966 – stopping off at the legends that are 1996, 1990, 1982 and an under the radar vintage that is 1970. The 2001 (18pts) was a great way to start “a proper vintage” as a guest next to me suggested. It certainly had a cool menthol feel to it, that is in contrast to some of the more flamboyant vintages we have experienced recently. Although it was showing well this still has a very long life ahead to it. 1996 (19.99pts!) is pretty much as good as claret gets for me – still so young, with just a hint of some tertiary aromas starting to come through. A brooding monster that is in perfect harmony. Jean described the 1996 as a perfectly balanced orchestra – he is bang on the money. For me, this is a more polished version of 1982. Simply stunning and a privilege to drink. Anyone that has a case should lock it up for another twenty years and then brace themselves for utopia!

The 1996 was a tough act to follow, however the 1990 (18.5pts) did this with great style. Far more giving than many 1990’s I have encountered of late and this was a real crowd pleaser on the night. It perhaps lacks the backbone of 1996 or 1982 but hey that is being very picky on a stunning wine. The 1996 is your Franz Beckenbaur vs. The 1990 being the Johan Cruyff perhaps. We then came to the 1982 (19.99pts)… oh the 82…. WHAT A WINE. The nose and palate attacked my senses like no other on the night. Mesmerising. Still so youthful, still so much vigour. I read a tasting note from Neal Martin later that night that summed the wine up perfectly – a magnificent monster. The textured layers of fruit kept on enveloping out, it just went on and on. I still believe the 1996 might, just might, better this, but again this is clutching at straws and in truth who cares. This is like Denman vs. Kauto Star, Federer vs. Nadal – just marvel at the beauty of both. For the record 1982 must simply Pele!

After I went to the washroom for a gentle sob and to thank the man upstairs – it was time for the 1970 (17.5pts) and reading a certain Mr Parker’s reviews, one might have been a little underwhelmed by this – particularly after what preceded. Well not a bit. This was gorgeous – not like the blockbusters beforehand but a wine that just seemed perfectly comfortable to reveal all and not pretending to be anything it is not. Lighter secondary aromas with gorgeous tobacco and truffled notes. This reminded more of your favourite most trusted comfy old chair – it may not look that good but you cannot help but love it. Finally after 3hrs and 45 min we hit the final wine of the evening the 1966 (18pts) – a wine with a huge reputation. Well it did not disappoint – more rustic than the 1982, 1990 and 1996 but far more aggressive and deeper than the 1970. So much power to this wine still and a touch of wild about the tannins. What a way to finish what was one of the greatest nights of my life. Thanks so much to Richard Ekkebus and the team at Amber – although I mention nothing of the food – it was stunning and balanced perfectly against the wines. If you have not been to Amber – make a point to get a reservation as it is up there as Hong Kong’s best.

Sometimes I find blogs just a little self indulgent – its more about the writer than the content. I hope – just hope that I have done a little bit of justice to these simply stunning wines from this magnificent Chateau. Anyone that owns a case of young Ch. Latour (or Forts for that matter) from any of the recent string of great vintages – rest assured, you will also have the just to feel closer to god!