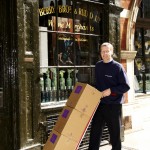 As Christmas approaches I am bracing myself for six weeks of early starts and late nights delivering in London. But after 27 years, I still relishes each round.

My normal day starts at 8.30am and ends at 6pm, but at Christmas it starts at 7am and won’t end till 10pm. The number of drops I have to make increases from an average of 20 a day to, well, my record is 67 in one day. And that’s six or seven days a week. It’s a great way of losing weight!

I’m lucky enough to have an area where I go every day: Fulham, Chelsea, Knightsbridge, Kensington, Acton, Ealing, Maida Vale. Some of my customers are like friends. You’re talking film stars, royalty… it’s very interesting. Every day’s different.

Wherever the customer wants the wine, we’ll put it there. I’ve been in lofts, basements, tunnels, the lot, and if they want their wine unpacked and the boxes taken away, we do that as well. Everything we do is done ‘the Berrys way’, which basically means the right way. They say, “You look after the customers, they’ll look after us and we’ll look after you.”

I get offered cups of tea and cake but unfortunately most of the time I have to say no because I don’t want to get a parking ticket. Touch wood, I haven’t had a ticket for about a year and three-quarters now.

I don’t mind driving in London at all because that’s where I come from. I’m from Chelsea, born and bred. My first job was at Chelsea Football Club in 1969, opening the post in the ticket office. They won the FA Cup in 1970 and I was on team bus coming back with the Cup. Then I was a groundsman at Queen’s Club, tending the grass courts. That was a beautiful job and the people there were very similar to Berrys.

My first job at Berrys – I’ll never forget it – was putting empty bottles on a carousel to get filled up. We used to bottle wine at Basingstoke in those days. After a few weeks they put me out on the road. I drove a Ford Transit with no power steering. My arms were quite muscly from trying to go round corners. I still drive a Ford Transit but it’s just like driving a car these days. I have my sandwiches and a flask of tea and I like to sing along to the radio. The other drivers take the mickey out of me but I don’t mind. Whenever someone new joins Berrys they get sent out with me for a day to meet the customers and learn the ropes, and I reckon they choose me because of my singing. 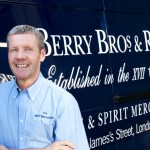 Christmas gets busier every year because the company’s doing so well. If it snows again it’ll be interesting. When it snowed in February, I got back to Basingstoke at quarter to three in the morning and was back on parade at 8 o’clock. But it’s fun; you laugh about these things. It only happens once in a while and when it does we all pull together.

Click here to read more features in the latest issue of Clarity.