What an honour and a pleasure it was to welcome Rick Kinzbrunner, the creator of Giaconda surely one of Australia’s finest wines, back to Piedmont five years after his last visit. The seed was sown for this brief three day tour when Rick came to Berrys last year to host a dinner. Mention of my moving out to Nebbiolo country had got him thinking. He had then proceeded to tell me of his passion for the grape; of his St.Chinian bolt-hole across the Alps; how he had three vintages of Giaconda Nebbiolo in the cellar; and how he would really try and make it out to see me. And come he did.

For what with global warming and wild fire, Rick’s Giaconda vineyards, planted in the early 1980s with the Chardonnay first bottled in 1986, have been feeling the heat of late. So six years back he grafted Nebbiolo onto half a hectare of wilting Pinot Noir. He’s happy with the result, as are the hacks at the Wine Advocate apparently, rating his Nebbiolo as the best tasted outside Italy. I sense though that his new business partner Michel Chapoutier is not so keen, preferring Syrah instead. Rick stresses he’s not out to make a me-too Barbaresco or Barolo style wine, but one that reflects the lower pH  granite and schistous soils that lie on the Victorian Alp foothills at between 500-700 metres above sea-level, made with the same painstaking care that characterises all his wines; wines that are truly hand-made, without recourse to yeast, pump or filter. 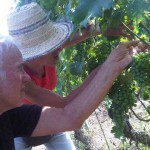 He lost no time in getting amongst a small selection of Piemontese friends/producers I’d lined up for him – Mario Fontana, Davide Rosso, Maria Teresa Mascarello, Teobaldo Rivella and Luca Roagna – quizzing them about everything from the amount of leaves left when thinning to the levels and timings of sulphur additions.  And to return the compliment, he shared out a bottle of his exquisitely poised 2008 Chardonnay and compact blue-blooded 2006 Warner Vineyard Shiraz both no doubt benefiting from Rick’s dabbling in the occult: 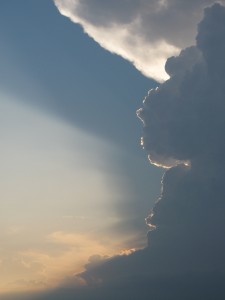 And who better to visit during this particularly hot and humid spell than this former air-conditioning engineer from Queensland – although I’m not sure if he ever did get around to mending Cascina delle Rose’s dehumidifier that packed up recently, much to owner Giovanna Rizzolio’s despair.