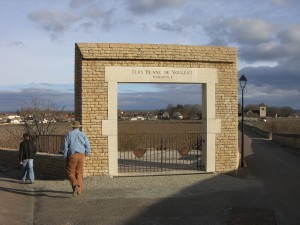 We had a bit of a treat last week when we celebrated the 900th anniversary of the extraordinary vineyard called Clos Blanc de Vougeot. It is well known how the monks of Cîteaux, having established their new monastery in 1098, started to plant up what is now the Clos de Vougeot from 1110. Fewer people are aware that they singled out the vineyard next door, known as La Vigne Blanche or Clos Blanc de Vougeot, as being clearly a white wine site and planted accordingly. There are hardly any white vineyards in the Côte de Nuits, but this one has been in existence for nine centuries.

Today it belongs in its 2.29 hectare entirety to Domaine de la Vougeraie, whose winemaker Pierre Vincent came to London to present all 10 vintages that Vougeraie have bottled of this wine – 1999 to 2008 – since purchasing the vineyard from l’Héritier Guyot. Pierre took over from Pascal Marchand shortly after the 2005 vintage, so we could see the hands of two different winemakers at work. The main technical differences between the two regimes are slightly earlier picking and a little less new wood since Pierre took over. 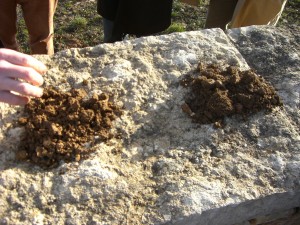 The vineyard is farmed biodynamically, with ECOCERT organic certification. The grapes go directly to the pneumatic press for a long, slow pressing, a minimal settling of the solids from the juice, then fermentation in barrel usually without lees stirring. The wines are aged in barrel for 15 to 18 months, with a maximum of 30% new wood, which since 2006 has been sourced from the local forest of Cîteaux via tonneliers Damy, Rousseau, Chassin and Gauthier.

Recent vintages of Clos Blanc have had a natural sense of balance, as well as an impressive level of detail and notable persistence of flavour, all indicators that the monks chose well when deciding that this should be a white wine vineyard.

After tasting all ten vintages from 2008 back to 1999 we finished with a treat summoned from the BBR private family a reserve – the 1919 Clos Blanc de Vougeot bottled by Jules Regnier of Dijon. Read Jasper’s tasting notes.