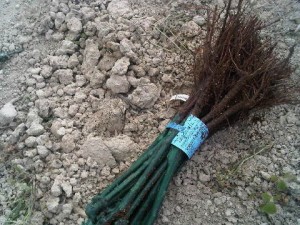 I hadn’t long landed back in Serralunga d’Alba after my two weeks in Tuscany when I was off again to Monforte, just across the valley, this time to watch Chiara Boschis of Barolo producer E.Pira plant a new vineyard.

Gone are the days of digging a trench and planting by hand. Now it’s done mechanically, inserting the young vine (left) into carefully prepared soil via a GPS-controlled navigation system to ensure the contours are matched. And if that wasn’t impressive enough, you’ll see from the video below the detail with which Nebbiolo clones and rootstock are mapped out according to the subtle changes in soil composition and aspect. Chiara, now ably assisted by her brother Giorgio (recently released from his duties at ‘Borgogno’, the old family winery in Barolo), is sowing the seeds for greatness – if the taste of her 2006 Cannubi, sampled this morning, is anything to go by…

With temperatures, and canopies, now rising, it was time to take to the hills this weekend, the maritime Alps an hour west of Alba, to join Chiara and her 19 cows 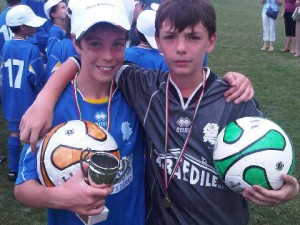 who’ve recently made the transhumance. Chiara’s part of a ‘herd’ of Barolo producers: the so-called ‘I dieci Martini’ (so named after the ubiquitous family living in the area), investing in the renovation of derelict villages around Castelmagno; a region famous for the quality of its cheese. I didn’t so much as see the cows as hear them high above on the ridge; their bells clanging as they munched.

And then it was back down to earth, to Alba for my son Nicholas’s (left in the photo above) football final; scoring a hat-trick and awarded player of the tournament…let’s hope Fabio’s lot fare as well over the coming few weeks!