Every cloud has a silver lining: an evening with Noël Pinguet of Vouvray producer Gaston Huët 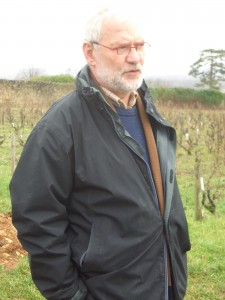 Marooned I may have been, but Noël Pinguet’s (left) tutored tasting for 31 fortunate few (me included), in Berrys’ cellar on Monday night, more than compensated for this inconvenience. And just as the Icelandic volcano has reminded us of man’s meekness in the face of nature, so Noël’s wines clearly substantiated the pull of biodynamics: harnessing nature’s (free) power to brilliant effect and not a plume of ash in sight either.

Now I’m not that good at accents, but what was it Noël said about his approach to biodynamics these past twenty years?  Something about being a ‘pratiquant non croyant’ (a ‘practising non believer’); and yes they have been doing it that long (in the vineyard) and not a certificate in sight. Noël’s been winemaker at the estate for 30 years; his father-in-law Gaston Huët buying the then three hectare property, ‘Le Haut-Lieu’, in 1928.

As hoped, this event was more than just a promotional platform for the iconic Gaston Huët domaine, all 35 hectares of it, with its distinguished Chenin Blanc vineyards: Le Haut-Lieu, Clos du Bourg and Le Mont. The evening was not simply a 12 wine tasting but an entertaining insight, full of vignettes as to what makes Huët more than just Vouvray; just as I’d always viewed those of François Cotat as more than just Sancerre: scintillating wines in a class of their own.

I smiled at how Noël confessed to making the Huët wines purely for himself, not for the market; anything left over is then offered out for sale. He’s even inclined to call time on the sales of a vintage, returning the stock to the safety of the dark cellars; to see the light when old enough to be appreciated. So while an average of 150,000 bottles are produced annually; there’s approximately four years’ stock tucked away in the dark, damp (100% relative humidity) tuffeau/chalk cellars hewn from ancient banks of the Loire.

Indeed that’s one reason, he cites, for the absence of screwcap on his wines; the humidity would rust this fair weather closure in seconds. “Show me a 60 year- old Vouvray closed with screwcap!” Meanwhile, he marvels at the 1947 at home; the one stoppered with a cork. Oh, another reason being that he can never remember the French for ‘screwcap’…

Noël respects what the vintage brings, rather than delivering commercial conformity. He picks the fruit to arrive at a certain level of alcohol, while the grams of residual sugar (RS) are a natural by-product of this decision; his Secs lie in the 7 – 10 gram bracket; Demi-Secs 17 – 20; Moelleux at the 60 gram level. Call it biodynamics or sensible yields but the wines have a salty dry extract that echo those of Zind Humbrecht and the like, rendering them seemingly dry to taste and excellent food wines.

Among the other benefits of biodynamics, Noël went on, is the refreshing levels of (tartaric) acidity, over and above the dominant, apply malic (the wines do not go through malolactic conversion); hence the soaring light and life of the wines. He’s found that the vineyard character and quality have been more clearly defined, compared to those of the Before Biodynamic period (‘BB’ – pre ’89). That translates into a elevated sense of place, be it the gravely fruitiness of Le Haut-Lieu, the heavy clay fleshiness of Clos du Bourg, or the limestone minerality of Le Mont (generally picked last).

The downside of biodynamics – holy cow! Are you sure, you cry! – is that the harvest is earlier than during the BB epoch when the month long picking went on until early November. Now it doesn’t. Compounded by global warming, November harvests are a thing of the past, part of his father-in-law’s era. Earlier, shorter harvests are playing havoc with his logistics and equipment; he must buy a second press to accommodate the deluge of fruit arriving simultaneously. The warmer conditions accelerating the sugar accumulation and abbreviating the hang-time, meaning that bunches risk never reaching the sweet spot of the growing season: physiological ripening, when sugar, tannins and acidities mature in sync. In fact so worried is Noël that he’s even playing with the idea of planting other varieties such as those of the Rhône: the white Roussanne and Marsanne to cope with the new norm…but this would place him even deeper in the mire with the Appellation Controlée authorities. His practice of eschewing green harvests – “a 50% drop does not result in the equivalent reduction in yield, but only 30% less, as berries swell disproportionately” – is frowned upon by the authorities. He prefers that the vine, plant by plant, finds its own crop load naturally, according to its age, with Noël passing through in a series of ‘tris’ to select what he needs; this way the berries remain balanced.

Sorry if you’re finding all this a bit ‘sec’ (dry), here’s a flavour of the wines tasted:

– 2005 Petillant: a well-poised cider apple thing thanks to a 2nd bottle fermentation, three years sur lattes and a dosage drop of Moelleux

– The 1996 Haut-Lieu Sec and 1995 Le Mont Sec showed the merit of cellaring these wines; still young they exuded charm with verbena (the ’96) and orange (’95) notes, to match with hollandaise sauce dishes, with fish or fowl

– The Demi-Sec style, the true expression of Vouvray in Noël’s eyes on account of its foodability (?) was expressed through the 2008 Le Mont (pinging this way and that), while the 2002 Le Mont was pure bliss: a sublime salty thing (at approx 18 grams RS). The older Demi-Secs, while delicious and still young (oh! to have a deep chalk cellar of one’s own, on wheels pls), reiterated Noël’s point about lack of vineyard definition pre-biodynamics: the ’85  Le Mont limy light, angelic even, while the ’76  Le Mont was a hedonistic sun-tanned beauty

– All were seduced by the four Moelleux. The 2008 Le Mont 1er Trie sensationally complex and adolescent (62 grams RS) thanks to a 18hl/hectare yield; a rich tarte-tatin ’96 Le Mont 1er Trie with taut acidity the perfect match for Roquefort-esque cheese; while Noël’s favourite vintage, the non-botrytic ’89 Le Haut-Lieu 1er Trie brimmed with the succulence and muscle to go with baked foie gras; the crescendo, the 2005 Cuvee Constance, from botrytic fruit picked berry by berry to deliver deft purity (and 136 grams RS).

While digesting all that, the question I should have asked was flighted towards our guest: ‘So what’s the difference between Vouvray and Cöteaux du Layon?’

Richard Kelley MW, Loire expert  and Noël’s importer, snapped up the query mid-flight, putting the audience straight as to the geological fault (whose?) between the younger chalky limestone soils of Vouvray and the ancient schistous Layon. Noël reflected and then put it another way: Vouvrays are gentler, lighter, more convivial expressions (of Chenin Blanc), while those of Layon are pithier, dark and brooding. Much could be said about their creators, Monsieur Pinguet; the pleasure was all ours! Thank you.

4 Responses to “Every cloud has a silver lining: an evening with Noël Pinguet of Vouvray producer Gaston Huët”