News from Austria, Germany (and Alsace) on a must-have 2009 vintage… 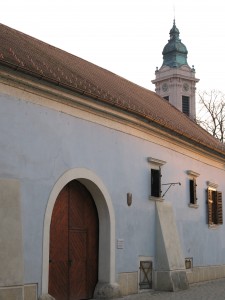 Surprise, surprise it’s not only Bordeaux (Burgundy and Barolo) that have performed in 2009. A 4,000 kilometre tour (‘in macchina’) to 26 producers in three different countries convinced me that there are some real jewels to be snapped up when we offer the (Austrian and German) wines to our customers in August; notably those from Prager, Schloss Gobelsburg, Hiedler, Hirtzberger, Donnhoff, Merkelbach, JJ Prum, and Heymann-Lowenstein. The wines from Van Volxem, Ostertag and Zind Humbrecht were still bubbling away so unavailable for comment.

I lapped up my first tour of the Austrian winelands, not just the cucina with its tendency towards consommé soups, boiled meats and carp (once it’s had time to sift out the mud in a fresh water lake that is), but also for the originality and warmth of the people, and hence the wines; qualities no doubt brought to bear by surrounding Bohemian, Slavic and Slovak influences.

The quality and character of the Austrian 2009 white grape harvest was shaped by a natural thinning of the Grüner Veltliner crop caused by a cool flowering, triggering millerandage (flowers fail to pollinate so drop off leaving few berries, thicker skins and healthier open bunches) while the later flowering, more abundant, and so vulnerable Riesling was hit hard by two weeks of solid rain in mid September, blighting the riper (softer skinned) vineyards forcing (top) producers to select hard. A mild damp summer kept acidities high, irrigation taps turned off while the quality was sealed by a long dry harvest through to early November. 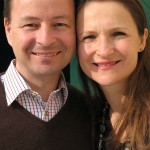 It wasn’t hard to spot or smile at the high quality of the ‘09s, a perfect harmony of richness and racy acidity; the Veltliners delicate yet expansively textured with flecks of white flowers, pepper and stone fruit, while the Rieslings are compact and confident; especially those of the Lower Austria zones of Wachau, Kamptal and Kremstal. Dare I say that the Veltliners have the edge in 2009? Michael ‘the Monk’ Moosbrugger (left), the mild-mannered manager of Schloss Gobelsburg (whose spires are in the picture, right), a Cistercian estate, refers reverently to ’09 as being like ’07 and ’05; now there speaks a man who’s in it for the long 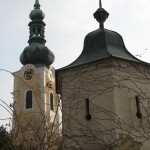 term having secured a two-generation lease in ‘96! There’s much in Michael that reminds me of Andre Ostertag, not least the quality of his gentle yet profound wines. Toni Bodenstein of Prager presented an immaculate range as ever, drawing on peerless old vineyards (Achleiten, Klaus, Wachstum Bodenstein) and the latest technology. While the young Franz Hirtzberger, recently married and now resident in the ‘manor’ house, struck me as a star in the making; and that’s not just because he served his apprenticeship in Italia! (good man).

One last thing before leap-frogging from the banks of the Danube to those of the Rhine: time to check out the quality of the Burgenland reds, south east of Vienna, in particular the Blaufrankisch grape from the likes of Prieler and Moric. Maybe it was the connection through the Leithaberg Mountains – in effect the tail end of the Alps north west of the Neusiedlersee Lake – or the grape’s predilection for large Slavonian or Austrian oak barrels but these wines have something of Piedmont about them, eight hours drive to the west…and no I wasn’t homesick. But watch this space…you’re sure to be ‘Blaun’ away!

Now to the Germans…it’s been a few years since I last visited the Rhine and its tributaries but my! how they’ve grown! The conservative Donnhoff is now pulling in fruit from his Nahe neighbours to meet demand; Johannes Leitz is weighing in at an eyebrow-raising 40 hectares compared to 7 ha a decade ago; Roman Niewodniczanski of Van Volxem, the Bitburger beer scion, is cornering the Saar market growing to 42 hectare these past years (including 2.5 hectare for 25 growers!), determined to conquer the thriving domestic market (and who knows where next?); even the delightful Reinhard Lowenstein (in the video below) has taken on a couple of extra thousand litre Winningen vineyards. Why? It seems that production of dry/trocken Riesling is now full steam ahead. The crucial difference, Helmut Donnhoff pointed out, being the price the customer is now prepared to pay for this style of wine as opposed to ten or fifteen years ago. Now Helmut’s prepared to pick the quality of fruit destined for trocken production and so meet the demand, encouraged by a ray of global warming no doubt. But Roman’s Scharzhofberger neighbour Herr Muller has evidently never studied the basic rules of adjacent diversification, recently investing in Australian vineyards…

As to the 2009 Rhine vintage: they, like their close pals on the Danube, benefited from the millerandage-induced effects of a cool flowering (yields down significantly) a mild summer (no heat spikes) and a long dry harvest period, so no panic picking. The result: perfect pitch, clear vineyard definition along with wonderful ripeness and spring-water like acidity. Indeed, so successful was the harvest that it was the first time that Helmut Donnhoff has ever accumulated all the Pradikats in his cellar (miaow); he’s drawing comparisons with the likes of ‘71! Reinhard 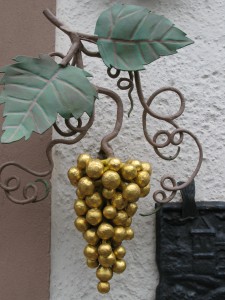 Lowenstein, still grinning despite a painful back, offers a fuller more structured expression of Riesling, in the vein of top Burgundy, thanks to vertical 400 million year old calcareous slate soils and long ferments; notably the smoky aristocracy of the Uhlen Blau vineyard and quivering energy of Rothlay. I was transported back in time by my visit to the classic Merkelbach brothers of Urzig, whose family’s wines were awarded first prize in 1889; that was when they had 1 hectare; now they have grown to an eye-watering 1.9ha having just bought a new vineyard despite ‘getting on a bit’. Their wine and approach echoing Francois Cotat’s: scintillating purity from top sites vinified in a timeless fashion using old 1000 litre barrels! Johannes Selbach (Oster)’s fine Zeltingen crus of Sonnenuhr, Himmelreich and Schlossberg interpreting the perfect ’09 growing season, with just enough rain and wrapped up in a long beautiful autumn. Up (or was it down?) stream, Katharina Prum, the delightful daughter of Manfred (of JJ Prum) was a picture of refinement, preparation (she studied law till ’03), precision and refreshing candour; just like her wines, be they the stony ‘08s or  stunning ‘09s.

My last stop was briefly in Alsace where Olivier Humbrecht’s corralling growers to support plans for a Premier Cru system; if they don’t, says Olivier, then there’s a risk of repeating the Grand Cru mess of thirty odd years ago, one effectively designed by the Cooperative. Lucas Rieffel near Barr will be 100% organic with the 2009 harvest and has been having significant success with his low sulphur, juicy Pinot Noirs in the local Strasbourg market (makes sense). Chilean Pinot Noir and earthquakes preoccupy Andre Ostertag; though I could not help but be moved by his 2008s, a stunning range. Olivier Humbrecht counsels caution with ’09, a vintage somewhere between 2000 and 2003 in character, fraught with issues of overcropping, heat stress, and higher alcohols…he too was promoting his crunchier 2008s.

Ps. Next time you’re in the Nahe, book a table at the Hermannshohle Restaurant, Oberhauser for the finest (Zander) cucina tasted for a long time …since departing Piemonte anyhow!

2 Responses to “News from Austria, Germany (and Alsace) on a must-have 2009 vintage…”