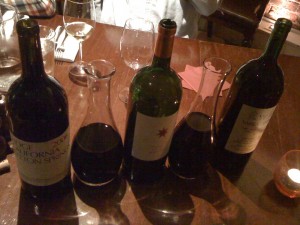 As my wedding was nearing, the obligatory Stag Do needed to be arranged. What was decided upon involved all the typically testosterone fuelled traits – such as “shooting each other” with paintballs, DRINKING and eating red meat.  The latter activity came in the form of booking the private dining room at the Hawksmoor.

After nursing our war wounds, caused by repeated point blank shooting of one another, we got tidied up and made our way to the restaurant in Shoreditch.  When closed the restaurant resides behind some very industrial looking shutters – shutters that belie the quality of restaurant hidden within.  The restaurant itself is smartly presented but simple and non pretentious – the effort is purely focused on the quality of food and service.

We arrived with a few minutes in hand and were treated to some gin and tonics before being seated (they are quite well known by all accounts for their cocktails).  We had managed to reserve the private dining room – less of a separate room more of an annexe off the main seating area – which was great as it gave us a certain privacy but still felt involved us in the hassle and bustle of service.

Among other reasons for booking the restaurant, such as serving some of the supposedly best rare breed meat in London, was the fact that we were able to take our own wine and pay a minimal charge for corkage.  Among the nine of us we took three magnums – Loosen Oberhauser Brucke Riesling Spatlese 2006, Ridge Lytton Springs 2006 and Yarra Yering Dry No. 1 Cabernet 2003.

We were looked after right from the start, were never rushed and the courses came as and when we were rested between courses.  Decent sized goblets and decanters were supplied, although we had already double decanted the wines three hours earlier.

Starters were basic yet very tasty and consisted of smoked salmon, potted Yorkshire beef on toast etc. and these we 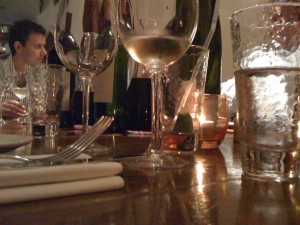 drank with the Donnhoff – a beautiful, Riesling Spatlese showing fantastic delicacy and elegant freshness but still holding all the honeyed richness one would expect.  The wine was rich, yet finished, with a wonderful freshness and dynamism – a long life ahead of it, but irresistible now!

We then moved in to the main event – the steak!  There are fish options and vegetarian options (I think!) but this is not the place to come to unless you are having the meat as it’s all from rare breed longhorn cattle, aged for at least 35 days.  Dictionary thick, these steaks melt in the mouth and are from all cuts of the beast, cooked to perfection.  They were served au naturale, unsullied by any extraneous sauce, though sauces and sides (triple cooked chips – fantastic!!) could be ordered.  I had the rib eye whose fat melted like butter but, by all accounts, the Sirloin etc. had by others was just as wonderful.

We had the meat with the two reds, both showing wonderfully well.  Firstly, the Ridge Lytton Springs with its intense cassis note and rich palate yet with an old world savouriness / earthiness – very well balanced / defined and poised perfectly to counterpoint the richness of the meat.  The the Yarra Yerring, again very well balanced, yet with a more precocious new world element, riper blackcurrant fruit – a touch more glycerine I felt on the pallet.  We had a bottle of the Argentinean (Michel Rolland) Clos de la Siete in the wings  just in case we ran dry and frankly even though it was an excellent wine, one could see the quality jump and focus prevalent in the other two.

You realise that you have had a good time, when the next thing you know, it is about three hours later and you have not felt rushed in any way whatsoever – the service was excellent, food fantastic and wine great.

Next stop for the night – Sin City (or so I’ve been told by the best man!!)

5 Responses to “Hawksmoor – A British Steakhouse”