Believe me, I’ve never witnessed a tasting room reduced to such stunned silence. The 30 guests attending André’s two-hour Alsace masterclass in Berrys’ Pickering Cellar on Thursday sat glued to their seats even for an extra ten minutes after the session finished, open-mouthed, as if begging for more. The Alchemist of Alsace, André Ostertag, had indeed worked his magic!

In the manner of a latter-day saint the gently-spoken André Ostertag eloquently set out how wine is a synergy of land, sky and people; his experiences with biodynamics; the distinction between his ‘Vins de Fruit’, ‘Vins de Pierre’ and ‘Vin de Temps’, and through a comprehensive tasting, their evident capacity to age. Throughout the session, shots of soil, vines and villages were interspersed with evocative images drawn from Christine Colin-Ostertag, his wife’s art portfolio (see below).

Being a second generation vigneron – his German family (‘Ostertag’ meaning ‘Easter Day’) founding the then three hectare estate in 1966 – André had evidently been put in his place by the elders; those looking askance at this Lycee Viticole de Beaune graduate and upstart who dared to put Pinot Gris in oak (despite the grape’s Cote d’Or heritage). That was 1983, when his towering Muenchberg Pinot Gris was denied the honour to be labelled as such, becoming ‘A360P’ overnight; its grid-reference. ‘Before’ he smiles knowingly, ‘I had to find my place, but I’m older now’. The point was proved with the 1998 Pinot Gris Grand Cru Muenchberg spoke of the grape on the nose, but soared with Muenchberg’s minerality to taste; no sense of the 66% new French barriques used. 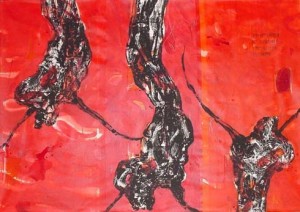 1998 was also the date he converted his 12.5 hectares to full biodynamic production, after a two year trial. It continues to amaze me that the effects of biodynamic viticulture – whereby, as André put it, ‘the plant system converts energy into nutrients’ – are visible even after such a short period. But then as André explained later on, the vine responds immediately, arranging its leaves naturally so there’s no overlap, ensuring maximum efficiency. The vine on his ‘Vins de Pierre’ (terroir wines) labels representing this special link between earth and sky (and no wonder perhaps that the produce of which, grapes and wine, were believed by ancient Egyptians to possess divine qualities). Biodynamics, André said, encourages deep root systems; roots which therefore draw on nutrients deep down, so capturing the essence of terroir, thereby giving his wines a salty minerality. While modern viticulture favours feeding the vine, encouraging the roots to stay near the surface; thus, superficial roots and wine! And of the non-biodynamic practices of his neighbours 1.5 metres away, André states that vines are like sheep: they stick close to their shepherd, and respond to his call.

And the wines on the night? The Vins de Fruit, wines that blend fruit from across vineyards in a fruit forward expression and age for five to seven years, were represented by the delicate, hay-like 2007 Sylvaner VV and intense, crunchy 2008 Pinot Blanc Barriques. The Vins de Pierre, terroir wines with a 20 year life depending on the vintage, kicked off with a pair of Clos Mathis Rieslings 2006 and 2003: cool and focused, the result of well-ventilated, granite-based soils. The 1999 Heissenberg Riesling had clearly settled into its stride after ten years, reflecting the Heissenberg (‘Hot Mountain’) red sandstone and granite terroir; the 2005 tense and verbena-like. The Pinot Gris from his Zellberg vineyard – ‘the Hermitage of Alsace’ on account of its pink sandstone, clay and chalk soils – quivered with energy, even with sensual white truffle 1996. The majestic Muenchberg wines, two Riesling one Pinot Gris, crowned the evening. Identified first by Cistercian monks way back, one could almost sense the vineyard’s spiritual roots. The wines, especially the focused 1998 Riesling, displayed taut minerality and terroir over any fruit expression. And as way of a sweeter, André ‘s 2007 Gewurztraminer d’Epfig beguiled us with its delicate rose petal perfume and fine balance.

André ‘s wines proved to be a mirror-image of their creator. They’re works of art to be collected and celebrated.’