Week 10 of wine adventures in Piedmont 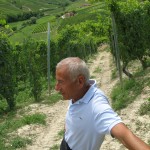 Judging by the wave – ok, ripple – of interest following last week’s ‘Tale of Two Barbareschi’ game, the answer evidently can’t come a moment too soon. Yes, you guessed right: it was Producer B, Signor Teobaldo Rivella (left), hopefully coming to a Fine Wine Merchant near you this autumn! Well Hurrah! I hear you cry. There were bonus points for providing a reason why but I think we’ll dispense with that in the circumstances; let’s just say that it had something to do with producer philosophy, size of estate and range, proximity of vineyards, producer experience, simple intuition and taste (or lack of it). Which brings to mind Mrs Brown’s lapse of tact at the G8 summit; hadn’t she heard that veal/vitello as espoused by the (ancient) Italian culture was apparently an English, or was it Scottish, invention…before they become mmmad (the cow that is)!

Talking of superfluous parts, Langhe producers have been busy in the vineyards removing 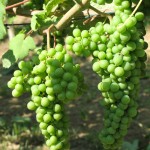 unproductive female shoots and leaves that sap the vine’s energy: ‘sfemminillando’ as the process is known, cleaning up and aerating the vine’s fruit zone. Nebbiolo bunches are long, fairly loose and languid with small hard musket-ball berries (right), while Barbera bunches are more compact, rounder with generous, luminous light green egg shaped berries. It’s important that bunches are spaced out (not in a biodynamic way) to provide ideal ripening conditions, ahead of a possible green harvest in late July/August.

More on biodynamics. This week Davide Rosso, of Serralunga d’Alba estate Giovanni Rosso, concluded his own biodynamic experiment: tasting the same wine from barrel at the same time every day for a week ‘blind’ before comparing his notes against Maria Thun’s ‘Biodynamic’ Calender to see if there was any obvious pattern…and indeed there was: the wine was truer, more expressive and delicious on the fruit and flower days, while displaying a general restlessness and imbalance on the others (see Davide’s blog, which is coming to Wine Matters soon). Separately, Stella di Campalto of certified biodynamic Brunello di Montalcino estate San Giuseppe (see my week one blog), came to the region for the first time, although her father is a Torinese. The occasion merited an evening at Alessio’s Centro Storicio, Serralunga, drawing together around a dozen top Langhe producers/stars to meet Stella and taste her stunning wines (her first 2004 Brunello received 95+ points from the Wine Advocate if you’re asking). Interestingly her take on tasting in accordance with the calendar is not just that fruit and flower days are more expressive than root and leaf, but that the effects are particularly startling if the wine has been made solely along biodynamic lines; from vine to bottle.

Bottling, or lack of it in the case of Bruno Giacosa’s 2006 Barbareschi, has also been generating some discussion, though evidently not as much as in some English journals. Roberto Conterno of Giacomo Conterno is more nonchalant on the subject saying that it wouldn’t be the first time a top producer hasn’t bottled a vintage. As to an assessment that the vintage was ‘cattivo’/bad, there he patently disagrees; as do I having tasted a fair few 2006s during my rounds – despite some rain around harvest time it’s a vintage which shows rich dark cherry fruit expression, spice and fleshy generosity and presence; one to look forward to. Of course I’ve heard other commentary as to what might really have happened in downtown Neive…but then that would be telling! 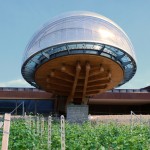 Other big names on the block have been upping the PR stakes of late. Ceretto unveiled another architectural wonder, ‘L’Acino’ (left) or ‘The Grape’, thrusting out over their vineyards near Alba; a wonderfully imaginative addition to the Castiglione ‘Cube’ and Cerequio ‘Chapel’. Rival Fontanafredda (below right), across the hill in Serralunga d’Alba, is regarded locally as an institution thanks to its royal roots; King Vittorio Emanuele II gifted the 50 hectare estate to his mistress, Countess Rosina. Now part of the Farinetti ‘Eataly’ empire, the region’s legendary Chef Cesare Giaccone has been drafted in to shake up the estate’s kitchen while a ‘Sentiero dei Pensieri’ (A Path of Thoughts) was recently opened to the public among the ‘Bosca di 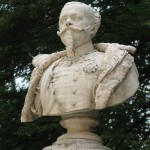 Silenzio’ (Silent Wood); a tricky stunt to pull off given the 200 people trampling their way round on the day I visited. Angelo Gaja, meanwhile, did it his way, hitting the headlines with a Silvio-esque romp to celebrate 150 years on the job along with 600 of his closest friends and producers (and no, I wasn’t invited) to sip Gosset Champagne and, ironically, Barbaresco.

Next Week: the latest from Sicily’s fine wine region of Mt. Etna.

One Response to “Barbaresco and Biodynamics”