Summer arrives with a whoosh!

It was as if someone had yanked up the thermostat overnight, gazumping spring in favour of summer. For since May 1st the temperature has risen dramatically to 30-35 degrees celsius by day and 23 by night, forcing all but mad dogs and Englishmen to hibernate in the middle of the day. Yet being perched high up on the Serralunga ridge at 450 metres there’s always a refreshing breeze to ventilate vines and minds. 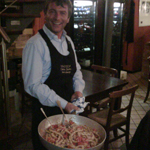 Liberal amounts of spice and Barolo Monfortino is what Roberto Conterno of Giacomo Conterno selected as his weapons of choice to open the pores. In a scene out of Celebrity Chef (or was it Hell’s Kitchen?), Roberto joined Serralunga’s Centro Storico team to dish out the hottest pasta piatti to date, complete with fetching pinafore…(see left).

Less welcome, the heat though has triggered the onset of peronospera (downey mildew) as humidity is unlocked from the soil after weeks of rain, rising up into the canopy above. Here the prescribed fungicide is Copper Sulphate solution, with separate doses of Copper where necessary; unfortunately the evil mancozeb is also used in extreme cases. Later on oidium (powdery mildew) is the worry, with sulphur the antidote. Or as Olivier Humbrecht MW, of Zind-Humbrecht and President of DEMETER the international biodynamic certification body put it: low vine vigour is the best preventative measure of all! Logical really: overly vigorous vines (foliage and fruit) – too much fertiliser or inappropriate soils – leaves the plant vulnerable to diseases, necessitating treatments that in turn spawn a another set of new problems to be ‘cured’; just like us in fact. And so it was in post-war European viticulture as production soared. Time to stop the rot.  Here is Davide Rosso explaining how he treats pests in his vineyard:

Environmentalists among you will be relieved to hear that the local birdlife is thriving; just as Manuel Marchetti of Barolo Marcarini remarked during a recent visit to London. And true enough the warm thermals have lured a whole host of brightly-coloured friends to the Langhe hills. Rusty-tailed Nightingales lurk low down among the thickets, breaking cover as you pass and singing imperceptibly by day and angelically by night. More recently the heat has brought on a rash of Turtle Doves, purring pussy-like deep among the copses. Lime-slate coloured Serins trill as they shuttle between vineyards and rooftops, chattering as they go. As do the flocks of Bee-eaters, il gruccione, (see right), babbling away to each other, drifting high above. Terracotta crested Hoopoes ‘hoooh-poooh’ from any suitable vantage point, while Redstarts prefer tiled roofs from which to deliver their sizzling notes. And to cap it all, high, high above are the alba-trosses of the air: white-bellied Alpine Swifts, fixed winged ‘falcons’ soaring majestically above the flotsam below. 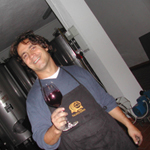 Another who treasures a rich ecosystem is young Ferdinando Principiano (see photo) of Monforte d’Alba, whose vineyards are located mostly within Serralunga. Aspirations early on to be the next Clerico/Scavino/Rivetti etc. fortunately came to nothing as he struggled to make the wines work, let alone enjoy them. It was at this time, in 2004 or thereabouts, that coincidentally many of these (in)famous impact Barolo wines began falling over, failing to live up to their billing; sent back in anger by Albese restaurateurs. And so, after some soul-searching he chose a path midway between Voerzio and Conterno; turning his back on nasty chemicals in the vineyard. The result: cleaner, brighter fruit that effectively turns itself into fine wine without intervention, pure and simple. So no need for the consultant’s friend, the rotofermentor; the viticultural equivalent of the ‘pressure cooker’, whose multiplier effect builds bigger, richer, more alcoholic wines that, funnily enough, tend to…topple over.

Next week: my! how we’ve grown; Piedmont vs. Burgundy, spot the difference; news from Timorasso and Gavi

4 Responses to “Summer arrives with a whoosh!”