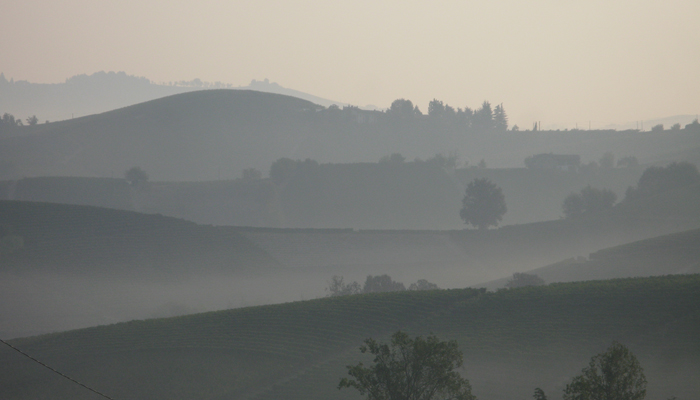 OK, so it was hardly a Hannibal on an elephant moment, but my peppy Japanese two-stroke piped a note of euphoria sixteen hours since leaving the Shires; sweeping past the ‘Italia’ sign midway along the alpine tunnel before popping out, off-piste amid thick cloud and snow into the Valle d’Aosta below.

The euphoria didn’t last long, unlike the damp cold nebbia/fog that has cloaked my every move ever since arriving in Piedmont. Imagine an ancient hilltop village, vertiginous vineyards on all sides, scarce funds (you may well ask), a bare fridge, seemingly cut off from the outside world, little grasp of the local patois or customs, beard, sandels (OK, flip flops) and ecco! A monastic scene straight out of ‘The Name of the Rose’. Throw in the news that one of our suppliers is resolved to becoming a nun and the picture’s framed.

Thank God (see!) for the (Giovanni) Rosso family, who’ve adopted me as one of their own, even to the point of assigning me an office complete with weighty (Ikea) bureau and green Churchillian lamp! That said their winemaker son Davide still hasn’t forgiven me for failing to turn up in a Jag…but he was re-assured on hearing they’re two-a-penny among colleagues back home.

* In a break from the norm, David Berry Green, wine buyer at Berrys’ since 2001, has relocated to Northern Italy for seven months. The objective? To develop a keener understanding of Italian culture while focusing on the wines of Piedmont and, more generally, on delights a little further afield.

One Response to “Aventura italiano”